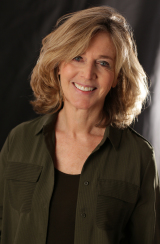 Stefania is a native Italian by birth. In her thirties she left Milan for London, where she now lives.

Prior to taking a serious interest in Acting and Filmmaking she dedicated her energies to writing for a magazine published by Mondadori (Airone, 1986-1998), to interior decoration both in Italy and abroad, and to fashion, creating her own bespoke knitwear brand.

In 1999 she made a U-turn towards the study of human behaviour, resulting in an MA in Psychotherapy at the City University in London (2004), and the opening of her private practice.

Thirteen years ago she started acting, first on the stage and then in front of the camera. Amongst other roles, Stefania performed as Lady Bracknell in Oscar Wilde's The Importance of Being Earnest, a role which earned her a positive review in What's Hot London "...No one embodies these Victorian values more than Stefania Montesolaro as Lady Bracknell...Bracknell waves him away as if she were Queen Victoria herself, but Montesolaro gives her a playfulness which suggests eccentricity rather than snobbery..." (Eddie Saint-Jean).

In 2017 Stefania played the title role in a 2 act play The Wily Widow, - an adaptation from Carlo Goldoni's  La Vedova Scaltra - which she also co-wrote and produced. The play was firstly staged in a theatre in Islington (2018), and subsequently at the prestigious Teatro Franco Parenti in Milan in 2019. In both theatres the play sold out on most nights.

As an actor Stefania draws from her life-experience, composed of good fortune and some grave disappointments: divorce, miscarriages, and breast cancer, all successfully overcome. Her youthful enthusiasm combines with the mature convictions of someone her age. Stefania always gives her undivided attention, her firm commitment and her best to every project she undertakes.

The entirety of life's experiences, both professional and personal, brought Stefania to her newest chapter, started a few years ago, when she realised that she could express herself behind the camera.

She is now working on the screenplay for a Drama/Romance TV series; Voiceless explores gender fluidity and the abuse of social media in a group of young people. Timely topics where Stefania makes good use of what she considers being the best tools in her kit: her deep interest in human nature, and her fresh visual creativity.